The technology automatically disconnects the engine temporarily has many different names depending on the car manufacturer, namely: i-Stop on Mazda cars, Eco Start/Stop on Mercedes cars or Start/Stop Engine on Toyota cars...

Currently, many new-generation cars are equipped with the function to automatically disconnect the engine when the car is stationary (pause) to save fuel and reduce emissions.
When activated, this technology will allow the engine to stop working (the vehicle stops waiting for a red light, stops at the curb, or when the vehicle changes gears (P), or the user removes the seat belt, etc. However, few people know that to be able to shut down the engine and quickly restart the ignition process quickly, cars with special battery requirements are equipped.
In fact, most car users have the basic knowledge that cars drive in the city with a constant explosion frequency (very large current required) while the continuous running time is rarely A full charge will cause the battery to burn rapidly. With vehicles fitted with technology that suspends the engine when not loaded, the explosion density increases dramatically, causing the battery to bear more load, reducing life expectancy.
In addition, when the engine is temporarily switched off, many car parts, including the new generation air conditioners or headlights, still need maintenance. These devices require high constant current, thought to be powered by the vehicle's generator, which now relies on batteries.
Meanwhile, traditional car batteries are only designed to power a vehicle ignition several times a day and power some basic electrical equipment that doesn't require a lot of energy (like the Insufficient to meet the requirements of the new motor shutoff technology.
As a result, models that are able to stop engines often require the use of sealed batteries with pressure valves called AGM (Absorbent Glass Mat). In the past, this type of battery was often used limited in the maritime and telecommunications sectors ... due to its high cost. This is also the reason why AGM batteries are sometimes called telecommunications batteries by experts in Vietnam.
While using the same lead-acid technology platform as traditional batteries, their distinct construction allows AGM batteries to excel in power / storage stability and can be fully charged much faster. times and withstand the state of high current. This feature allows it to meet the electrical needs of modern cars. 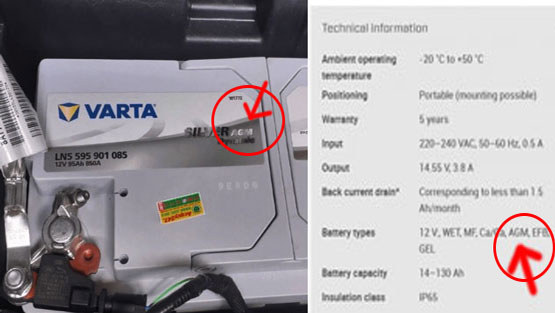 Using AGM batteries not only guarantees its own durability, but also helps reduce wear and tear for many automotive parts, including generators and drivers. More importantly, if vehicles require the use of AGM batteries but are fitted with batteries, they can often experience sudden battery failure, leading to many risks during use. In case of operation, the vehicle may not be able to start the engine, need to be assisted by hospital.
In a bad situation, turning off the air conditioning system in harsh sunlight or when the temperature is too low can have fatal consequences. For this reason, some high-end models may proactively alert or disable certain features when the installed battery type is deemed inappropriate.
To know if your vehicle requires AGM battery, the user should refer to the manual supplied with the vehicle or contact the manufacturer. For its part, AGM batteries are usually clearly stated on the label. Vehicles without AGM batteries can still use these batteries normally, but this is unnecessary waste as the price of AGM batteries is usually 1.5 to two times higher than traditional batteries.
In Vietnam today, AGM batteries are popular with capacities from 70 Ah to 95 Ah, corresponding to the selling price of 4.5 million to more than 5 million VND. Meanwhile, prices for traditional batteries of the same capacity range from over one million dong to 2.5 million dong.
Source: HaNoiMoi & VnExpress